You are here: Home » What ASHS Offer » Timber » Lime

Uses  Widely used for carving as well as the manufacture of small articles such as brushes. Can be used for interior joinery, e.g., panelling. Is also widely used in turnery. The renowned wood carvings of Grinling Gibbons were always done in lime.
Scottish Lime  You can get reasonably large boards in lime; lime boles can be up to 15 metres, with diameters up to 1.2 metres. Scottish lime is available but in relatively small quantities of varying colour and quality.

Grain  Straight grained.
Strength  Low stiffness and shock resistance - hence its fame as a timber that doesn't split very easily - but medium bending and crushing strength. Not as strong as the benchmark European beech.
Density  Lime has a density around 540kg per cubic metre at 12% moisture content, making it less dense than European larch, but slightly denser than Douglas fir.
Structure  Texture of lime is fine, indicating diffuse porous structure, with few visible features.
Durability and Drying  Heartwood perishable; sapwood liable to attack by common furniture beetle. Dries well and fairly quickly with some tendency to distort.
Colour & Figure  Lime is a creamy colour, but will become browner on exposure to light.
Working Properties  Blunting slight as lime is a soft timber. Sawing is generally satisfactory. Machines well, but a reduced cutting angle is recommended and cutters should be kept sharp. Gluing is good, nailing satisfactory, and bending moderately good. Stains and polishes reasonably well. 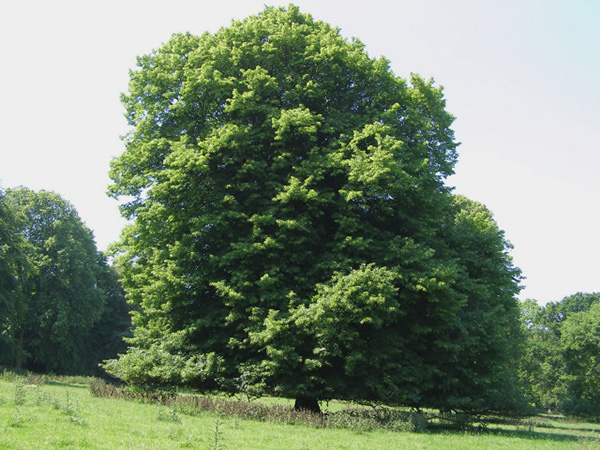 Looks and Leaves  The common lime tree reaches a good height, normally around 30 metres but can grow as high as 46 metres. The ascending branches form a high rounded crown, but the lower branches droop down. In winter the tree can be easily recognised by the shape of its crown. In summer lime trees are thickly leaved and very shady. Vigorous sprouting often occurs from the base particularly in trees standing alone. Bark is smooth and grey on young trees, becoming fissured as the tree matures. Leaves are similar to small leaved lime, 6-10cm long, arranged alternately in two rows with long stalks, being heart shaped with a toothed margin. The undersides of the leaves are green. Leaves unfold at the end of April; but the tree doesn't flower until June. Small white flowers grow in cymes of 7-11 blooms. Fruits have thick shells with indistinct ribs.
Habitat  Seeds of the common lime - a hybrid between the small leaf and broadleaf limes, are not very fertile, hence the tree is found little in the wild. It's generally found in avenues along drives.
Ecological Value  Sprouty growth is good for some nesting birds, and fragrant flowers are much loved by bees. The tree also hosts large numbers of a leaf aphid responsible for the sticky honey dew secretions on the leaves in summer. Large numbers of other associated insects, help make lime trees an important part of the food chain. Tops may be loaded with mistletoe.