You are here: Home » What ASHS Offer » Timber » Birch 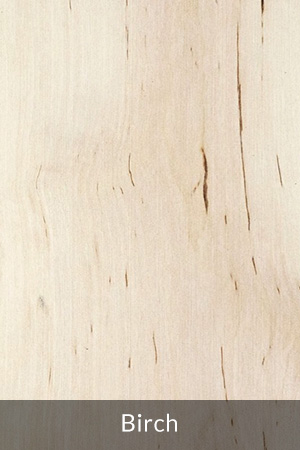 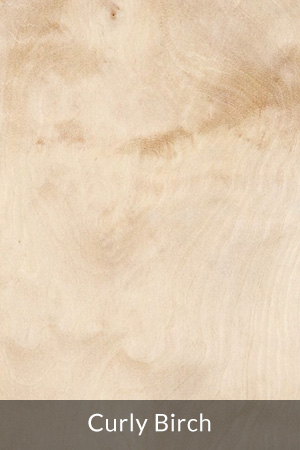 Uses  In Scotland, birch is used for interior joinery and furniture making as well as a small quantity of flooring. It's also excellent for turnery and for making small items such as brush backs and utensils. In Finland and Russia, it's the principle wood used for making plywood.
Scottish Birch  Good quality logs are available in small numbers and consequently supplies of birch planking and products such as flooring are also small. If you want to use a large quantity of this timber, you will probably need to place an order well in advance. Although birch is the most widespread native broadleaf tree in Scotland, there are a limited number of good quality logs as commercial production of birch is limited and the quality is variable. In the last 20 years, there have been a number of initiatives by public and private organizations to improve the management of the birch resource, prerequisite to an increase in the use of birch timber for manufacturing and joinery in Scotland.

Grain  Generally straight.
Density  Birch has a density of around 660 kilograms per cubic metre at 12% moisture content.
Structure  Growth rings distinct, demarcated by layers of terminal parenchyma, with a diffuse porous structure. Other than this, birch has no visible distinguishing features; its rays and vessels are both small. Texture is consequently fine.
Strength  Similar to European beech, with a high bending and crushing strength. It's similar in toughness to ash (the toughest British hardwood used in the manufacture of agricultural implements) when dry, but not when green.
Durability  Classified as perishable.
Colour & Figure  Birch is pale creamy to yellow brown in colour. Its heartwood and sapwood are not distinct: it has a natural lustre and generally uniform appearance with a fine texture. Some birch planks have a particularly intense sheen and a distinctive masur marking - a highly decorative, flecked and swirling figure caused by the larvae of the agromysiz carbonaria beetle attaching the cambium of the tree.
Working Properties  Works relatively easily by hand, planes and moulds to good finish. Sawing and machining is generally satisfactory, but some boards will require a reduced cutting angle to prevent tearing of cross-grained material and irregular grain, particularly around knots. Moderate blunting on blades. Bends well if free from knots and irregular grain; pre-boring is recommended for nailing. Glues easily, stains and polishes well.
Drying  Dries quickly, but with a tendency to distort. Need to accelerate drying as prone to fungal infection. 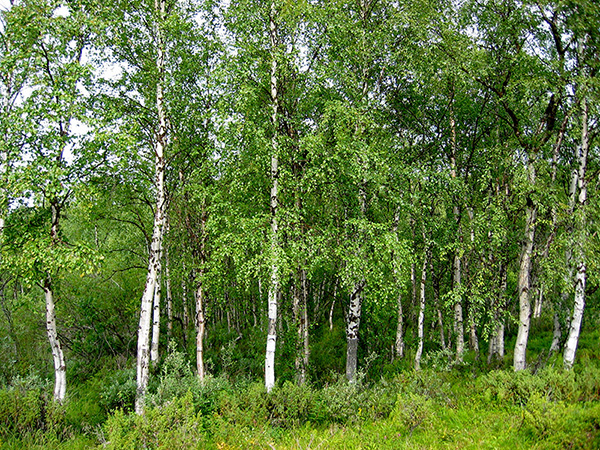 Looks & Leaves  Birch trees can reach a moderate height of between 18 and 21metres, with a corresponding diameter between 60cm and 1 metre, although many of the birch trees in Scotland are smaller than this. It is a slender tree with a columnar crown. The leaves of Silver birch are small (2-4cm long) and triangular in shape with a double toothed margin; Downy birch has leaves of a similar size but more oval in shape and with a single irregular toothed margin. Wind pollinated male and female flowers occur on the same tree in April and May on separate catkins.
Habitat  Birch will not thrive on wet peat, but can tolerate different soil types, growing best on sites below 300-350 metres that have freely draining mineral soils. Silver birch requires a lot of light and cannot grow under the shade of other trees; downy birch is more shade tolerant. In Britain birch usually grows in mixed stands.
Ecological Value  Birchwoods support many species of woodland plants, lichens, mosses, liverworts. They are a particularly good habitat for fungi. Birch also supports more species of invertebrate than any other tree, as well as broadleaved woodland bird communities and native mammals.
More Information  The Birch Woodland Management Handbook, Richard Worrell. Produced by Highland Birchwoods, the Timber Growers Association, and the Department of Forestry, University of Aberdeen. Published by Highland Birchwoods. Copyright 1999.